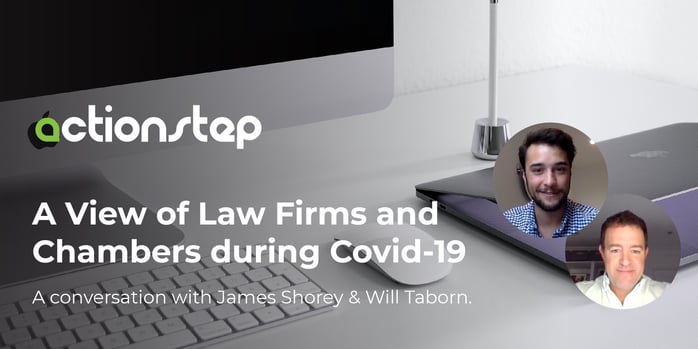 Taborn's is a legal concierge outsourcing business that connects businesses of all levels and professional service providers such as law firms to some of the best in class legal and legally related business services. Will Taborn (Managing Director at Taborns) has 20+ years’ experience as a barrister clerk in chambers and working for a variety of law firms, as well as being an Actionstep customer.

James Shorey, VP at Actionstep (UK) interviewed Will Taborn, Managing Director at Taborns about the situations raised over the last few months during Covid-19 and what the future of the legal sector could look like.

See the transcription below:

James Shorey (Actionstep): What have you observed across law firms since COVID-19 kicked off?

Will Taborn (Taborns): Generally in the legal sector, there have been a few factors that have been raised in this unpredictable time. Firstly, a forced change in practice in this industry that is traditionally resistant to change. Secondly, a widespread stress test of working from home practices. Thirdly, partners of certain firms are prepared to take pay cuts rather than lay people off, which is interesting. In 2008 when the crash was very fresh in the memory they figured out that it would cost more to rehire and now they're taking pay cuts, which is good to see as they're looking after their talent.

With the new leaders under the bar and minimal preparation in place has resulted in an inability to react to sudden changes. However, the smaller firms have often had few redundancies and because of this they are financially leaner than much larger firms and are acting quicker. We are even looking to hire from these bigger law firms and reap the rewards.

JS: Why do you think this happened specifically around the chambers?

WT: Chambers mostly operates as a collection of self-employed individuals, which means cohesion can be a real challenge in terms of different generations and personal circumstances through senior QC’s in their 70s and to the junior members of the bar who have come to it with quite a lot of debt.

For 100s of years, it has been a face to face business and it’s served itself very well. However, due to Covid-19, this model has been broken in a lot of cases. I have also heard of chambers buying laptops for clerks because clerks nearly took their PC towers home as they were not simply prepared for something like this to occur. Plus people are having their bonuses cut or furloughed while this is happening, especially in other businesses.

James: What do you think the impact of this is going to be in the future?

WT: Chambers “just in time working model” has been exposed in which a few chambers did react well. Generally, there are no disaster continuity plans in place which is demonstrated by the story of the laptop previously and these last-minute knee jerk scenarios damaging their income and some cases their reputation. The modification of the business model has been slow in a profession that has survived for many years. Plus there isn’t any appetite change on mass, but maybe this will be used as a catalyst.

Although it was said in 2008 that times have moved on - thinking that the bar should firmly view itself as a brand in a service industry is key. It is unique, it is a brand and it is a bastion of quality and fairness across the world. It is a service industry as they are providing a service to people and if they change that mindset to view it, the chambers model can flourish.

Generally, they suck money out of the chambers business model which they have undercharged and not evolved the structure, while traditionally spend too much on salaries and buildings which doesn’t serve them very well. I think these historical issues have caused these problems.

James: Where do you think firms will spend money moving forward?

WT: More money will be spent on things like cloud-based technology, and technology plans and processes. It depends on the individual organisation, but across the board, they need to consider what they have learnt from this and react to it and not sit on it. Actively looking at future collaboration with supplier and services in a traditionally isolated profession is an ideal idea. Professionals are generally backwards-looking, which makes sense in a way. They also need to find a differentiator, you can go to any law firm within reason and get work done but they need to differentiate themselves, same with the bar. Also, in-sourcing and outsourcing, as the business world adapts, they need to rethink how they can deliver their services to their clients.

James: What kind of outsourcing would you recommend?

WT: Outsourcing solutions are numerous and Actionstep is a good example of a tried and trusted platform to streamline services, not for better value but to do more for less. In terms of Taborns - through three decades of experience - we can plug-in services like members of the bar, where a law firm may not know who to go to or introduce investigatory services, procuring litigation funding or eDiscovery services.

We give access to the best in class services that are tried and trusted connections, and what this outsourcing does is saves the client and firm money because at the end of the day you’re not paying for another head to sit there and do that, you’re engaging us to procure and administrate that or our half and you can then increase the depth of your firm while saving money.

Will has spent two decades in leading barristers chambers working with many of the respected QC’s, junior and senior leadership figures of the bar, as well as being clerked as attorney general. Will was asked to be in the litigation arm of a major new multinational law firm which pioneered legal technology in this country and then Will was off to build a forward-thinking barrister led function for the new legal consumer; individuals, SME’s and all corporate entities. Recently Will formed Taborns, a legal concierge outsourcing business that connects businesses of all levels and professional service providers such as law firms to some of the best in class legal and legally related business services.

Find out more about Taborns >>

Ready to get started?